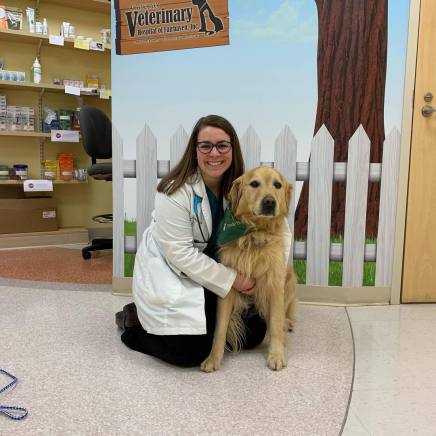 The Maine Golden Retriever Club has announced it selection of Bridget O'Donnell as the club’s 2020 Honorary Member.

Dr. O'Donnell grew up on the South Coast of Massachusetts. She spent her childhood surrounded by a pack of Golden Retrievers who nurtured her love for animals. She started her career in the veterinary field working as a kennel assistant in high school, then moved up to a veterinary technician during her college years. She attended the University of New Hampshire and received her Bachelor's Degree in Animal Sciences with a concentration in Dairy Herd Management. After graduating from UNH, she went on to vet school. She attended Ross University School of Veterinary Medicine in St. Kitts and finished her clinical training at the University College Dublin, in Ireland.

Dr. O'Donnell spent two years living and working in central Maine, but then decided to return to her hometown. She prides herself on honoring the human-animal bond. Her professional interests include animal behavior, nutrition, and expanding her knowledge of alternative medicine. Dr. O'Donnell is also involved in the Morris Animal Foundation Golden Retriever Lifetime Study. She is a dedicated study vet, as well as a dog owner participant. She has two dogs enrolled in the study- Dory and Bosun.

Dr. O'Donnell shares her home with an orange tabby cat, two Cavaliers, a Kittitian Love Hound, and a herd of Golden Retrievers. She hopes to one day start a small backyard organic farm. In her spare time, she enjoys cooking, sailing, playing badminton, and spending time with her animals."

The Maine Golden Retriever Club began inducting Honorary Members in 2012. The Honorable Leon Panetta, then Secretary of Defense, was its first honoree.
-Have a Golden Day-