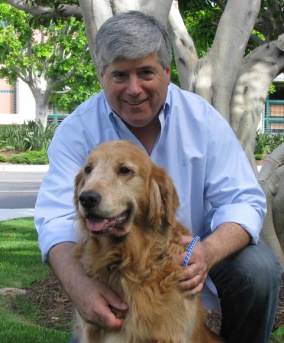 The Maine Golden Retriever Club has announced it selection of David Rosenfelt of mid-coast Maine as the club’s 2018 Honorary Member.  Mr. Rosenfelt is a distinguished author of mystery novels, many of which are based on the fictional character, Andy Carpenter, a lawyer who reluctantly takes clients; Tara, his Golden Retriever sidekick, and his passion for dog rescue, particularly rescuing Golden Retrievers.

“Your fellow companions of Golden Retrievers honor you for your tireless efforts to establish the Tara Foundation and with your wife, Debbie Myers, to rescue in southern California almost 4,000 dogs, approximately 2,500 of which were Golden Retrievers.  We also salute you for your continuing ambassadorship of the breed by telling the stories of lawyer Andy Carpenter’s continuing reliance on the wisdom, resilience and loyalty of his constant Golden Retriever companion, Tara,” MGRC President Susan Nattress told Rosenfelt.  “Our members have enjoyed the continuing saga of Andy Carpenter and Tara and look forward to your continuing observations such as: “I like dogs considerably more than I like humans.  That doesn’t make me antihuman; there are plenty of humans I’m very fond of.  But generally speaking, if I simultaneously meet a new human and a new dog, I’m going to like the dog more.”  A quote, reports Ms. Nattress, from Rosenfelt’s novel,  Play Dead.

Rosenfelt’s move from California to Maine in 2011 was chronicled in Dogtripping, published in 2013, which tells the story of the beginnings of the dog rescue foundation and the family’s trek from southern California to Maine with “25 rescues, 11 volunteers, and 3 RVs.”  The Associated Press hailed Dogtripping as “a delightful romp through the adventures – and misadventures – of running a dog rescue” and said “Rosenfelt very well could be the funniest American author alive today.”

President Nattress said that Mr. Rosenfelt’s “literary efforts in telling his family’s personal stories of canine rescue have conveyed the meaning, sense of purpose and humanity of rescuing Golden Retrievers and their canine compatriots to countless people throughout the United States and beyond.”  She also noted that his book:  Lessons from Tara, Life Advice from the World’s Most Brilliant Dog “provided corroboration of the wisdom and knowledge imparted by every Golden Retriever to human companions.”

Upon being advised of his induction, Mr. Rosenfelt responded: “My work in rescue has allowed me to interact with, and certainly to pet, more than 2,500 Golden Retrievers.  That is a record to envy rather than honor, but I nonetheless accept this honor gratefully.  It’s a pleasure to be connected to an organization that does such great work for such wonderful animals.”

The Maine Golden Retriever Club began inducting Honorary Members in 2012.  The Honorable Leon Panetta, then Secretary of Defense, was its first honoree.

-Have a Golden Day- 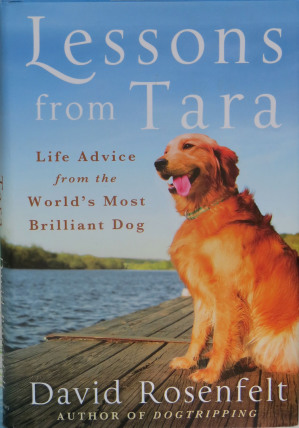