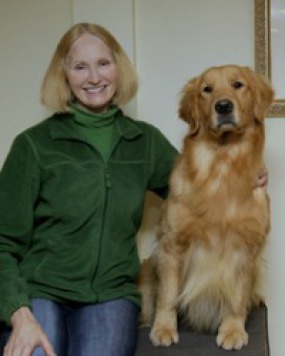 NEWS RELEASE
October 21, 2019
MGRC Names Rhonda Hovan 2019 Honorary Member
The Maine Golden Retriever Club has announced it selection of Rhonda Hovan of Bath, Ohio as the club’s 2019 Honorary Member. Ms. Hovan has been a breeder, owner and handler of Golden Retrievers under the “Faera” prefix for over thirty years, producing more than sixty Champions. She is the Research Facilitator for the Golden Retriever Club of America. As a health and genetics writer, she has won the Veterinary Information Network Health Education Award and the Eukanuba Canine Health Award.
“Your fellow companions of Golden Retrievers honor you for your willingness and commitment to helping the Golden Retriever breed and community. From your research into canine cancer and health to breeding, mentoring and judging, you have dedicated your life to helping this wonderful breed and we commend you for that”, MGRC President Amy Herbert told Hovan. President Herbert presented Ms. Hovan with the club’s “Head and Tail” coin and said that Ms. Hovan’s “founding of the Starlight Fund at the AKC Canine Health Foundation to support Golden Retriever health research was a great step forward. She understands the value of canine health research and is one of the driving forces behind the Golden Retriever Club of America’s substantial impact on canine health.”
Upon being advised of her induction, Ms. Hovan responded: “What a wonderful surprise! I am deeply touched. This is such a kind gesture, and I love the coin – very unique. As with all of us, the things we do for Goldens is a labor of love, but it’s a bonus to know that it’s appreciated by fellow Golden lovers. I do feel a connection with MGRC now, and working together, we will make the future of Goldens brighter!”
The Maine Golden Retriever Club began inducting Honorary Members in 2012. The Honorable Leon Panetta, then Secretary of Defense, was its first honoree.
-Have a Golden Day-