Leon Panetta, Secretary of the Department of Defense and former Director of the Central Intelligence Agency, was inducted into MGRC as its first “Honorary Member”.  The Club sent a letter to Panetta in October 2012 via Senator Susan Collins advising the Secretary of his induction.  The letter in part said:  Your friends have enjoyed the media reports of the bond between you and your Golden Retriever, Bravo.  As you well know, many returning members of America’s military have turned to canine companions to assist them in rebounding from the ravages of war.  We are pleased that you are setting the example of involving Bravo in your daily activities.

Secretary Panetta responded to the news of his induction in a November 2012 letter:  Thank you for inducting me into your club as its first honorary member.  I proudly accept this distinct honor.  It was exciting to hear this news from Senator Collins.  I even told Bravo.  As you know, dogs like him are special companions.  Enclosed is one of his favorite photos.  I applaud your club’s efforts to care for these marvelous animals.  Thanks again for this special recognition.  A handwritten postscript said:  With deepest thanks from me and Bravo!

The enclosed photo of Bravo and the Secretary is inscribed:  To the Maine Golden Retriever Club – with deepest thanks for inducting me as an honorary member – Bravo thanks you as well. Regards, Leon Panetta﻿ 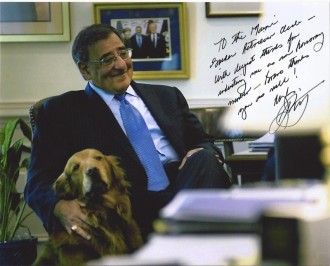 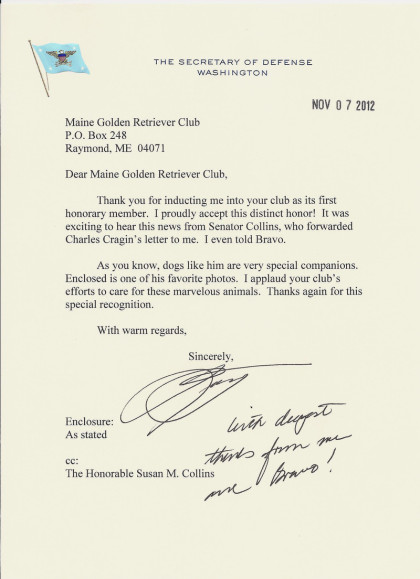