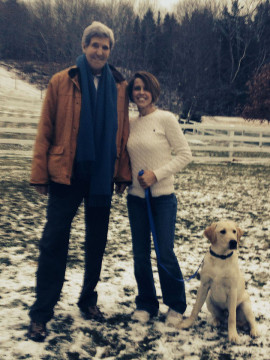 Secretary of State John Kerry visited Frances today to pick up his seven-month-old Yellow Lab that Frances has been training for the Secretary since September 23rd.  Frances, the owner of Puddleduck Retrievers, and a nationally recognized breeder of Labrador Retrievers and trainer of dogs was hired by Secretary Kerry to train his five-months-old Yellow Lab, Ben.  Two months has made a phenomenal difference in Ben.  As Secretary Kerry told Frances, "I'm very happy, you've done a great job with Ben.  He looks great, you took great care of him.  Thanks for all you have done."  Following a visit by the Secretary's security detail, Secretary Kerry arrived at approximately 3:45 PM, Nov. 26th and spent about an hour with Frances as she and Ben showed what the canine student had learned during his two month stay with the master trainer.  Congratulations, Frances!