MGRC members were saddened to learn of the death Friday, December 2nd of Luis Carlos Montalvan, a decorated Iraq war veteran, who was MGRC's 2013 honorary member.  He was 43.  Montalvan served 17 years in the Army, doing tow tours in Iraq.  He received two Bronze Stars and the Purple Heart.  His Golden Retriever service dog, Tuesday was the subject of Montalvan's book, "Until Tuesday", which became a New York Times best seller.

MGRC member Suzan Morris spoke for all of the members:  "The world has lost a great man and passsionate advocate for veterans, service dogs and those with disabilities.  I am in shock to learn the Captain Luis Carlos Montalvan has passed away.  Many of you may know him from his first book, "Until Tuesday".  Suzan, who has a Golden Retriever service dog, Friday, said that "we formed a friendship that started with service dogs with days of the week names.   It developed with us visiting him and Tuesday in New York City and then hosting them in Portland for grand rounds at the Maine Medical Center and a book signing at Planet Dog."

His second book, "Tuesday's Promise:  One Veteran, One Dog, and Their Bold Quest to Change Lives" will be published soon.  Tuesday is now being cared for by a loving family in the Northeast, according to a statement from Montalvan's family.

Here are links to two parts of a talk we gave at Parkland College (Champiagn, Illinois) in conjunction with the University of Illinois' School of Social Work and a number of other organizational partners including NAMI. We're still hoping to get up to your neck of the woods in Maine... 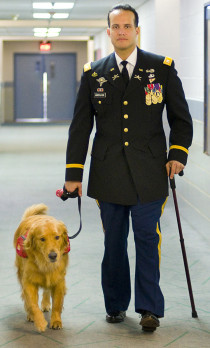 The Maine Golden Retriever Club announced today that it has inducted its first Honorary Member of 2013.  Captain Luis Carlos Montalvan is a 17-year veteran of the U.S. Army and served multiple combat tours in Iraq.  His personal decorations include two Bronze Star medals and the Purple Heart.

Charles L. Cragin of Raymond, Maine, the club’s President, wrote to Captain Montalvan to advise him of the honor and to thank him for his visit to Maine in January.  Montalvan is the New York Times Best Selling Author of “Until Tuesday: A Wounded Warrior and the Golden Retriever Who Saved Him.”

Cragin said that his “fellow companions of Golden Retrievers honor you for the bond you have cemented with Tuesday and the demonstration of the way the two of you, as a team, have been able to surmount the challenges of the ravages of war including Post Traumatic Stress Disorder.  Many of our members have read your inspirational memoir, “Until Tuesday”, and appreciate the great temperament of Tuesday and the mutual love and respect that you have for each other.”

Captain Montalvan told Cragin that “this is a great honor that the MGRC has bestowed upon us.  Thank you…And, we greatly look forward to returning to Maine and spending time with the members of the MGRC.”

Cragin told Montalvan that he is “blessed to have found a companion and helpmate who brings all of his attention to serving you.  You are now blessed to carry the message and experience of a life “Until Tuesday” and beyond.  We honor you for your service to your country and we honor you and Tuesday for the example you project of canine and human companions helping each other in the challenges life presents.”

“We aren’t just service dog and master,” Montalvan said, “Tuesday and I are also best friends.  Kindred souls.  Brothers.  Whatever you want to call it.  We weren’t made for each other but we turned out to be exactly what the other needed.”

On Monday, August 19, 2013, the American Kennel Club announced the winners of the 2013 American Humane Awards for Canine Excellence (ACE).  Tuesday, the Golden Retriever in service to MGRC's honorary member, Luis Montalvan was selected as the winner in the Service Dog category.  In December, Tuesday and Luis will travel to Orlando for the 2013 AKC/Eukanuba National Championship, where he'll receive a medal beside the other honorees at a televised ceremony.  Congratulations to Tuesday and Luis!