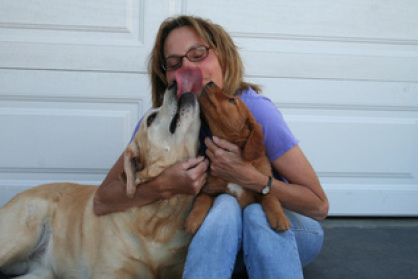 The Maine Golden Retriever Club has announced its selection of Judy Fridono of , California as the club’s 2021 Honorary Member.  Ms. Fridono is the Executive Director of Puppy Prodigies,  (www.puppyprodigies.org ) a non-profit which provides unique initiatives that utilize service, therapy and emotional support doges in an effort to empower people with disabilities, kids with special needs, wounded warriors and veterans with PTSD.  She is nationally known as the author of “Ricochet: Riding a Wave of Hope with the Dog Who Inspires Millions”. www.surfdogricochet.com

“Judy Fridono and her volunteer team at Puppy Prodigies are passionate about puppy development and work to provide puppies with long term advantages at an early age,“ said Kim Lorrain, MGRC’s President.  “We are pleased to add Judy and Ricochet to our list of distinguished honorees.  Ricochet is a certified therapy dog and one of the stars of the IMAX film “Superpower Dogs.”  Judy also volunteers at Pawsitive Teams with her own dogs as part of their goal directed therapy program with children and veterans with PTSD.

Ms. Fridono , in her acceptance letter, told the MGRC that she was “very grateful for this honor and proud to join such a distinguished group of honorary members.  I learn from the puppies and have been blessed with the opportunity to work with them and see first hand what they are capable of.  That is the joy of my life and MGRC’s recognition is most appreciated,” she said.