The Maine Golden Retriever Club has announced its selection of Terri Jo Rucinski of Chapel Hill, North Carolina as the club's 2017 Honorary Member.  Ms. Rucinski is Coordinator of Physical Therapy Services and Head Athletic Trainer for the University of North Carolina baseball team.  She works with "Remington", a three year old Golden Retriever, who works as a Medical Alert Assistance dog helping UNC baseball players who are recovering from injuries.

"Your fellow companions of the Golden Retrievers honor you for your willingness to team with Remington, not only in rehabilitative work at UNC but also for your outreach activities at the Duke Regional Hospital and assisted living facilities", MGRC President Susan Nattress told Rucinski.  Remington came to Ms. Rucinski through the Paws4People Foundation of Wilmington, North Carolina.  MGRC commended the organization "for the great work it does on a daily basis to provide assistance dogs to those in need.

Being in the health care field, I knew of the positive benefits that service dogs can facilitate in clients but little did I know at the time what an impact Remington would have on the PT patients and UNC athletes", Rucinski told MGRC.  "Remington is an inspiration and brings joy to all who meet him", she said.

Ms. Rucinski expressed her appreciation to MGRC saying that she was "privileged and ecstatic beyond words that the MGRC felt us worthy for this year's award."  MGRC President Nattress presented Ms. Rucinski with the "highly coveted" MGRC "Head and Tail" coin in recognition of her support of Golden Retrievers. 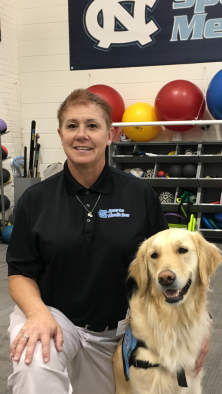